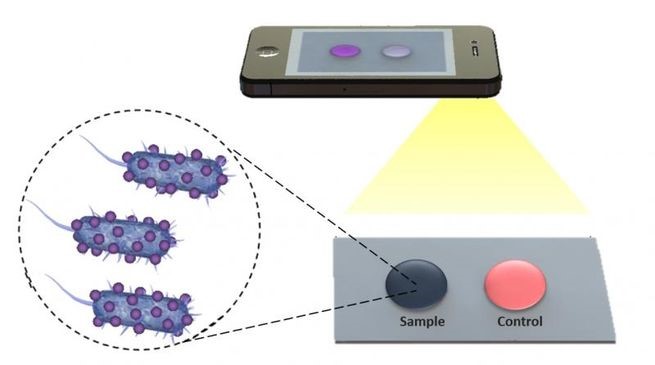 Biosensing Film For Smart Phones to Detect Bacteria and Viruses

Convenience seems to be the mantra of this generation. Everything needs to be fast, efficient, and convenient. This is why smart phones were made in order to centralize a person’s life onto a hand-held device. It’s astonishing to think the iPhone came out eleven years ago and has progressively improved its technology (along with other competitors) over that span of time. And when people think of smart phones they tend to think of apps, email, text, games, and movies. It’s primarily viewed as for work and pleasure.

But there is a whole industry built around the concept of using technology to detect disease, pollution, or drugs in bodily fluids such as blood, urine, saliva, and sweat. And now technology has advanced to the point where this monitoring can occur on your smartphone and sent to your doctor through “cell files”.

The inventors of this biosensing film are from Florida Atlantic University. This highly sensitive film has been proven to be able to detect HIV, E. Coli, and Staph. The way it works is to put a small sample of blood or saliva on the film and if any of those viruses or bacteria are present, there will be a bluish dye that shows up on the film as individual nanoparticles highlight the presence those foreign infected cells.
The patient then takes a picture of this film and sends it to the doctor for review. The doctors can then read these biomarkers so that the disease can be properly evaluated. The main focus at the moment is to make the film affordable since it is made from very cheap yet highly sensitive material.

The applications for this bionsensing film seem to be many. If there are patients living in remote, rural, or isolated areas, they can now be monitored by their doctors in order to ensure the patient’s health. But this can also speed up the doctor visits since they don’t have to run lab tests or wait for bloodwork from another facility.
When the technology improves so that more bacterial and viral infections are included, then patients can utilize the film to make sure they aren’t infected. But in the meantime, the main use of this film has been to allow medical professionals to diagnose and treat patients from a distance so that the symptoms can be mitigated, reduced, or cured without even a doctor’s visit. Depending on the severity of the illness, doctors can now advise patients the best course of action from afar to ensure their healthiness.

In addition, if the patient has received treatment or medicine for an infection, the doctor is now able to monitor the patient’s progress in recovery. Because of the sensitivity of the film, doctors are able to examine the biomarkers and see the differences of coloring and size of the spread over time. This allows the doctor to then set appropriate times for an office visit. So do you feel like you have strep throat? Do you feel queasy after eating that steak or burger? This film can conveniently help you identify whether you are infected or sick.

Guest blog by Will Chen.

5 Tips For Managing Your PDF Files